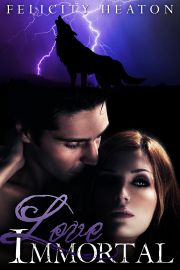 
Concept:
Rescued from werewolves by the most breathtaking man she's ever seen, Lauren is dragged into the fight of her life and a dark world she never knew existed. There, she discovers that she's the latest reincarnation of a goddess and must drink the blood of her immortal protector, Julian, in order to reawaken and continue her three thousand year old mission to defeat Lycaon, the original werewolf.

With the help of Julian and an organisation of people with supernatural abilities, Lauren fights for her life, their future and the fate of mankind against Lycaon and his deadly army, but can she succeed when Lycaon has killed all of her predecessors?

Can she crack the armour around Julian's heart and seize her happily forever after with him? And can Julian bring himself to trust Lauren with the fragments of his heart after everything he's been through?


About the Author:
Felicity Heaton is a romance author writing as both Felicity Heaton and F E Heaton. She is passionate about penning paranormal tales full of vampires, witches, werewolves, angels and shape-shifters, and has been interested in all things preternatural and fantastical since she was just a child. Her other passion is science-fiction and she likes nothing more than to immerse herself in a whole new universe and the amazing species therein. She used to while away days at school and college dreaming of vampires, werewolves and witches, or being lost in space, and used to while away evenings watching movies about them or reading gothic horror stories, science-fiction and romances.
Visit her blog at:  Parnormal Romance:


Review:
What can I say about this book?

From the very first page  Ms. Heaton grabs you with her talent and holds you in thrall through close to seven hundred pages of tense mile a minute romantic drama. ((That's over 157000 words can you imagine?))  Nitpicker me was smiling as I read each fluid and well written sentence. ((I couldn't find an error anywhere!))

I absolutely adore when a book grabs you and turns into a mental movie, and this book did exactly that.  Her descriptions were so vividly drawn of Julian, Lauren and their cast of friends that I could indeed see them. Heck I could almost hear and smell what they did too so well written were the pages. ((and the fight scenes were extraordinarily good.

Ms. Heaton took time to let romance grow as well, and of course when things finally heated up I nearly yelled out a great big Woohoo! ((I like erotica as well as the next person, but erotica just for that sake doesnt work for me, when the emotion and romance has built and I'm invested in the characters its almost divine, and this story had all of that))

I could probably go on and on, but doing so would end up in me revealing too many spoilers, which I won't do. I will say this,  this is not a light snack that leaves you hungry a few minutes later. This story my friends is a full meal that will leave you sated for a long while, only to make you hungry for more of her work ((and yes I will be searching out more of her works to read.))

It has it all, appetizers, first course through the end and dessert. Try it, You'll love it.

The bookish Goddess.
Posted by Tre at 3:56 PM No comments:

Which you will find including comments  here:

An Apple For Zoë: Book One ~ The Forsaken by Thomas Amo

Greetings and hello!
Having just recently forayed into the world of book reviewing I decided to open a blog, both to post my reviews and talk about anything Bookish...  I love a good book, stories that take you away from your everyday life and into worlds populated by interesting ((and sometimes not so interesting characters.))
Over time I hope to have more here than just a review or two, we'll see what happens.
I started out over at Book Lovers Hideaway  and will continue to post reviews there, After all that wonderful lady who I am lucky to call friend got me into this.  If you take a peek to the side, her blog is listed and SHE has some awesomely wonderful stuff going. Be sure to check her out.
Ratings system has a page of its own, so you can see what those feathers are all about.
Anyhows my writing friends I will see you on the front page, or maybe the back page, but definitely here. :)